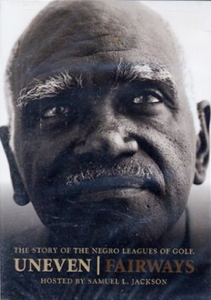 We’re screening two films about the history of African Americans and golf on Wednesday, Feb. 8, at 6 p.m. in The Bridge Golf Learning Center.

Uneven Fairways: The Story of the Negro Leagues of Golf focuses on the United Golf Association, golf’s equivalent of baseball’s Negro Leagues. Narrated by Samuel Jackson, this film tells the story of the black golfers who never got the full opportunity to play against the best in the world because of the PGA’s caucasians-only clause.

Bill Powell: More Than a Game is a USGA-produced movie about the man who built Ohio’s Clearview Golf Club, the first and only public golf course in America designed, built, owned and operated by an African-American.

The viewing will be followed by a discussion of history, law and ethics with Executive Director Farrell Evans; Richard Bronstein, a Foundation board member and attorney at Paul, Weis; and Jonathon Kahn, a professor of religion at Vassar and member of our advisory board.

The total run time for both films is about an hour, and there is no charge to attend. If you would like to attend, please register here.