In October of 2017, Golf Digest wrote about Wendell Haskins (right) and his efforts “to increase the presence and prominence of African-Americans in golf.” The article talked about The Bridge Golf Foundation as a program that is focused on education, life skills and high-level golf instruction. Co-Founder and Executive Director Farrell Evans was quoted in the article:

“We want our kids to have access to the social capital that golf affords. If they set a goal of working at Goldman Sachs, the relationships and code of behavior they learn from golf can get them an internship. If they become a plumber, some of their customers will be from the connections they gained through golf.”

Reporter Paul Rogers and photographer Johnny Milano spent weeks chronicling our young men’s work and play over the summer, from their daily STEM lessons in Harlem to their time in Bridgehampton, where they worked on the grounds crew and their golf games at The Bridge.

They focused on Juan and Antonio Cortorreal but also featured other students; our founders, Bob Rubin and Farrell Evans; and our STEM and golf teaching staffs.

“Two years ago, Juan Cortorreal had never held a golf club. And now here he was, a freshman from the Eagle Academy for Young Men of Harlem, competing against the top player from the Bronx High School of Science, one of the city’s best teams. …” Read the article

Michael Bamberger wrote about our Co-Founder, Bob Rubin, and the Foundation for Golf Magazine and Golf.com.

“Working with my former Sports Illustrated colleague Farrell Evans, Rubin started an afterschool golf-and-tutoring program in Harlem run by The Bridge Golf Foundation. (Twenty kids and growing, with a second location in the works.) Fresh fruit, TrackMan, laptops, structure. I visited it with Rubin. I wouldn’t call it a social condenser. I’d call it a social condenser incubator.”

The unique design of our Learning Center, courtesy of New York studio G TECTS, was featured in The Architect’s Newspaper.

“Chairman, cofounder, and principal owner of the Bridge, Robert Rubin, spoke of the “architectural challenge” of making the space a place the boys “would be proud of, and that told the story of the foundation to people that come in off the street, but also something that was attractive to New York City golfers.” 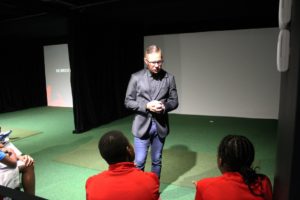 “Foley fielded questions about working with Woods, how he got involved with golf and about his shoe collection. He uninhibitedly spoke about his development as a man and a coach, how he achieves his goals and advised the young golfers on the merits of hard work and dedication.”

Duke Castiglione visited to learn about our Foundation and Learning Center:

Shortly before the opening of The Bridge Golf Learning Center in Harlem, NY1 reporter Roger Clark interviewed co-founders Robert M. Rubin and Farrell Evans, logged some time on one of our Trackman simulators with Teaching Pro Brian Hwang, and spoke with STEM Co-Teacher Veeshan Narinesingh about our after school program.

Donate today to make a difference for young men of color. ❯ Donate

Join the passionate mentors and volunteers who make our work possible. ❯ Volunteer