Posted in: A Father's View, The Bridge Golf Foundation

Michael Alameda Sr., a 39-year-old maintenance handyman at Columbia University, recently had a conversation with Executive Director Farrell Evans about raising his son, Michael Jr., and some of his own aspirations and goals to make a better life for his family.

FE: Michael was your first born. You were in your mid-20s. How prepared were you to be a father and to take on all the responsibilities that come with it?

MA: You try to prepare yourself, but I don’t think you can really prepare to be a father. I had watched all the things that my mother went through to raise me, but there isn’t a book on parenting.

FE: What was your relationship with your own father?

MA: With my dad it was never what Michael and I have. We were never close. I would have to go and see my dad maybe once or twice a month when I was growing up. I got my job at Columbia University because my dad worked at Columbia. He worked on 116th Street, and I was living with my mom on 123rd Street. I would see him when he passed by my building on the way to get his lunch at a Chinese restaurant.

MA: It’s been very important because I always said to myself that I would never be who my father was with me. That’s why I’m so involved with Michael. 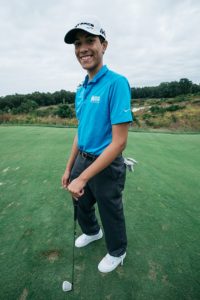 Michael Alameda at our Fourth Annual Benefit Outing at The Bridge.

FE: Michael has been in our after-school program since our launch in 2015. It’s been a pleasure watching him grow up. Why did you choose to sign him up for this particular program?

MA: Michael told me that he wanted to be in the golf program. Once he mentioned it to me, I promised that I would do my best to get him in. I wanted him to have something different that wasn’t always available in Harlem. When I was growing up in Harlem it seemed like it was all about basketball and baseball.

FE: We know that our young men face many of the same challenges with the educational and criminal justice systems as they have for generations, but do you see any improvements?

MA: It’s all about the parenting. I see a lot of kids the same age as Michael doing the wrong thing. In the past, there were fewer opportunities for that kid. Nowadays, with organizations like The Bridge Golf Foundation, kids have more options. There are more opportunities in the schools. Without The Bridge and schools like Eagle Academy, some of these kids could easily fall into the street life.

I grew up on the streets. The only time I left Harlem was during the summers when we traveled to see family in Puerto Rico.

FE: What are your long-term hopes and dreams for Michael and your other two children?

FE: Can you take classes at Columbia as an employee?

MA: I’m trying to get into the union so that I can take classes for free to better myself for the family. I don’t want my kids to ever think that you’ve made it to this point in life and you can’t keep making yourself better. If my kids can see how I keep improving myself for this family, hopefully they will want to keep improving for themselves.

I’m trying to get a mechanic’s position, which involves training in painting, HVAC, plumbing, carpentry and other trades.

FE: How have you seen Michael change since he joined the program in 2015?

MA: He’s matured in so many different ways. He loves it. He’s met so many cool and important people through the Foundation. We FaceTimed during his trip over the summer to the Hamptons with the Youth Works program. I’m really excited for him. I tell my kids that I live my life through them. My eyes are their eyes. They are having so many experiences I never had.

I was in a program similar to Youth Works that involved news production, but it wasn’t the same kind of work experience that Michael is getting with the Foundation. The responsibility of having to get up in the morning and then meeting job responsibilities on a daily basis. It’s better that he learns these responsibilities and skills now when the consequences for failure are relatively low.

There are other programs at Eagle, but golf is opening doors that most others don’t have.

FE: What do you do for fun?

MA: Not long ago, I took Michael to a Smorgasburg event in the city to let him try out all different kinds of food, instead of just the ordinary food we have every day. We travel to the Poconos every chance we get. But it’s getting a little harder with me being the only breadwinner in the family. Right now, Michael lives with his mother, and I see him every other weekend. That will change when I can move out of our one-bedroom and get a place big enough to accommodate myself, two daughters, my fiancée and Michael.

FE: What are your favorite sports teams?

FE: Every time I see you, you’re sporting a different cap. How big is your collection?

MA: Before the kids I was a big cap collector. Now I’m down to about 15.