My Introduction to Golf: Randy Taylor

Taylor with Tiger Woods on Randalls Island in 1997. Woods was making an appearance in a Nike-sponsored event for city kids, and Taylor was one of two players in the New York area to receive a scholarship to one of his golf camps.

In honor of Junior Golf Week, we gathered stories from our team about how they were introduced to the game. This installment is from Teaching Professional Randy Taylor.

In 1996, I was introduced to a program that changed my life.

My parents worked a lot, and they wanted me to avoid the trouble that awaited me every day growing up in the inner-city of Bridgeport, CT. Where I grew up, you either played sports or hung out with troublemakers.

My eighth grade teacher told my mother about a new after school program called the Bridgeport Academic Golf Program. After school, students would meet and study for an hour and then ride a bus to Fairchild Wheeler Golf Course. When my mother forced me to join this program, I was upset. I thought golf was boring and was afraid other kids would make fun of me.

Taylor and Sam Griffin, right, with other players and coaches representing the Bridgeport Academic Golf Program at the 1996 Ray Allen Inner-City Golf Invitational in Hartford. Team Bridgeport held off the Hartford and New Haven teams to bring home the first place trophy.

But on my fist day at the course, I was approached by Sam Griffin, the program’s African American head coach. He told me to smile and enjoy the beautiful surroundings. He made me smile, and I started to feel comfortable. I was shocked to meet an accomplished golfer who was black. Coach Sam was well known at Fairchild Wheeler for his multiple club championships. He even owned a golf repair store in Bridgeport!

Coach Sam showed me the basic golf grip with a pitching wedge. He told me to keep my eye on the ball and swing away. After missing five straight times, I finally made contact. I watched the ball take off and was hooked. I will never forget the look of satisfaction on coach Sam’s face when I hit that first shot. That was the beginning of my love for the game.

Taylor on the first tee at the Ray Allen Inner-City invitational.

When I arrived at Bassick High School in Bridgeport, my friends and I started a very competitive golf team, with none other than Sam Griffin as our coach. My teammates and I were very lucky to have him as a mentor, teaching us about life on and off the course. With five inner-city kids and a knowledgeable coach, we managed to beat some big high school teams. Although we lost our fair share of events, we represented our school and city with class and pride.

During the summers, my dad would drop me off at the golf course every morning with lunch money. I would hang out with my best friend, Kevon, and we would play golf all day, until we could barely stand. Everyone at Fairchild Wheeler looked out for us. The head pro, general manager and the rest of the staff made us feel welcome in a tight-knit community. The starters would let us play a second 18 for free. The snack bar staff gave us free burgers and never took our lunch money.

I think everyone saw these two inner-city kids who wanted to be part of something different, and they embraced us.

Then one day I took a break to eat lunch on a bench by the range. I was watching players hit balls when I noticed the teaching professional, George Heslin, giving a lesson to one of his students. I couldn’t stop watching, and I saw how much fun he had teaching. So I started to watch George teach almost every week. 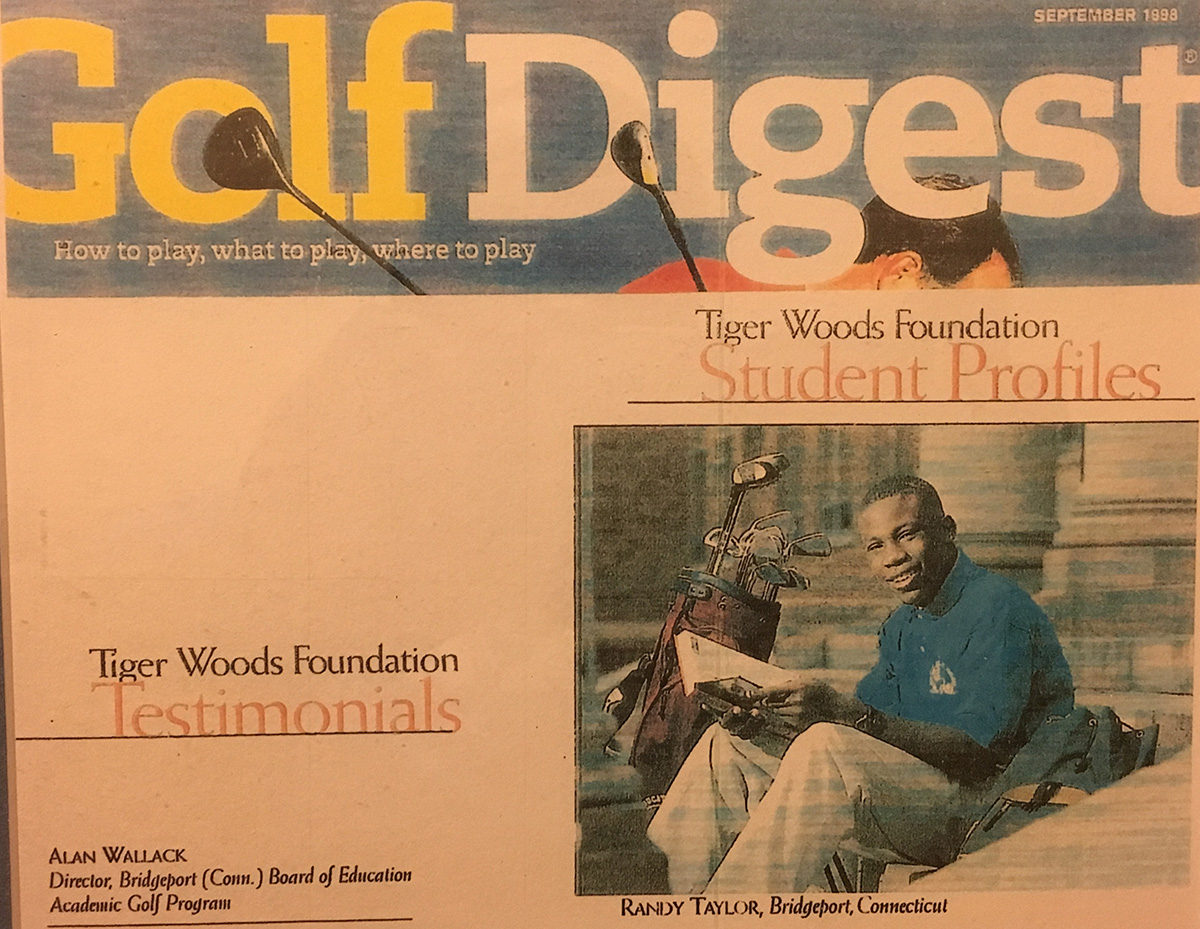 Taylor even got his picture in Golf Digest. The after school program in Bridgeport was partly funded by the Tiger Woods Foundation.

One day I was watching George give a clinic to a group of adults. The general manager noticed me and asked me to grab a bucket of balls from the shed. I filled the range trays for George’s clinic and got a closer look at how he taught. A few weeks later, I became his official helper, and from that moment on I knew what I wanted to do for a living.

I wanted to teach the game to anyone who wanted to learn, just like George.

I started to play less and work more with all four of the talented PGA pros who worked at Fairchild Wheeler. They hired me part time while I was in high school and even attended my graduation. These pros basically helped raise me.They were my mentors in the business of golf, and they taught me the real meaning of being a professional.

Now I’ve come full circle, working with the young men in our after school program just like Coach Sam worked with me. My after school junior golf program literally changed my life, and I hope that I can have a similar impact through The Bridge Golf Foundation.