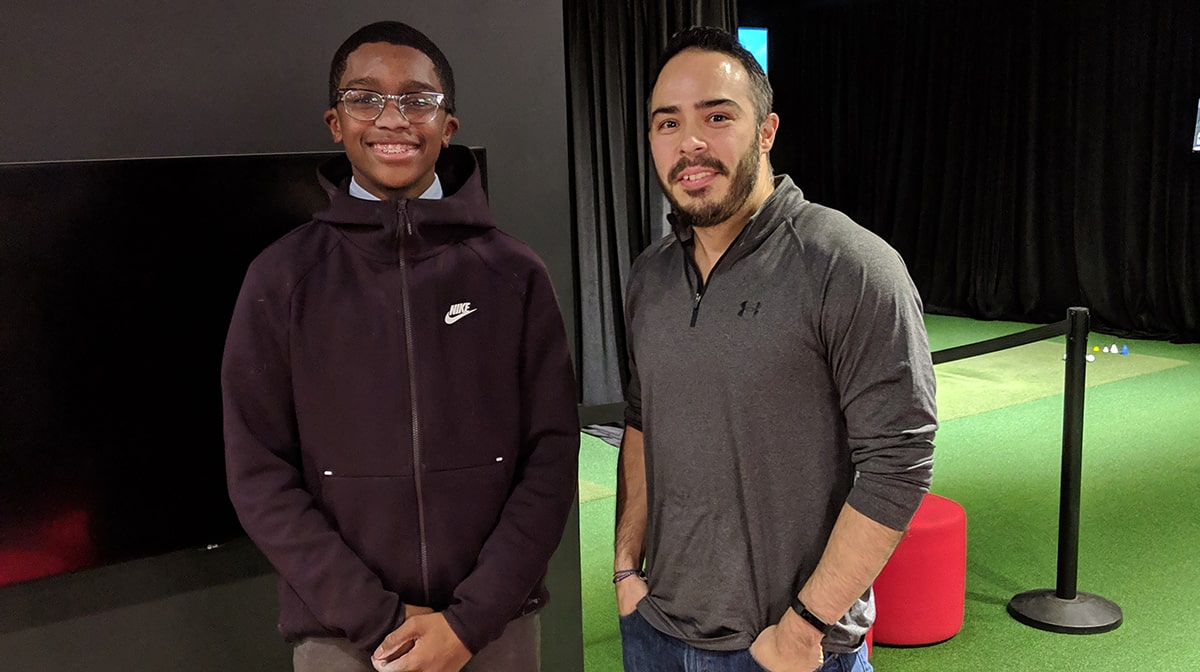 Jacob Trevino is mentoring Xavier Partee, a student in our after school program.

When Jacob Trevino was a boy growing up in a small town in West Texas, he worked in the cotton fields to earn extra money for his family. Today he’s a nanotechnologist working for a startup in Brooklyn and serving as a mentor to Xavier Partee, one of the students in our after school program. Charlie Hanger, digital content manager for the Foundation, talked to him recently about how he got from there to here.

CH: Tell us about your childhood, your family, and where you grew up.

JT: I’m originally from Abernathy, a small town near Lubbock, Texas. My mom was third-generation Mexican-American, and my dad was second generation. Abernathy was majority Mexican-American and African-American, just a little town with about 2,000 people total, and almost everyone worked as farm laborers.

Our family was pretty poor. When I was in grade school I had to work in the cotton fields to make money in the summers. My dad was an electrician, a laborer, and my mom worked for an industrial pump company coordinating inventory. It turned out that her company was closing the facility in Texas and transferring operations to a facility in Central Pennsylvania, so we moved to Danville, PA, when I was in 7th grade.

JT: The education system was limited in our town in Texas, compared to what would be considered standard in the U.S. at the time. The situation was similar to other small towns with lower income communities, meaning several students would not graduate high school, a higher proportion of girls were pregnant before graduation and had to leave school, and other common issues which you can imagine. It’s a very similar story to that of inner city schools. And so when I went to Pennsylvania, that was a bit of culture shock for me.

Danville is about 75 miles southwest of Scranton, and there is a major hospital in the area, so a lot of the kids came from families of doctors and generally more educated families. The school there had almost no diversity. In my graduating class, there were no African Americans, and I was the only Hispanic person.

CH: Did you feel like expectations were different for you because of your background being different from most of the other students?

JT: I never really got a sense of that. I was a very social person, and I think that made the teachers and other students accept me more easily. In Danville, race issues were not as prevalent as they were in Texas, which was a very nice surprise for me at school. I was also naturally good at certain things, especially math, so even though I didn’t have a strong educational background, I was able to make up some deficiencies really fast. I was lucky that was something I was good at. So I did OK in high school, well enough to get into Susquehanna University, a small private school near Danville. I also ran track and cross country in college, so that also helped me get in and get a scholarship.

JT: My first semester of college was really tough, and I wasn’t sure I was going to make it, but thankfully one of my professors, Dr. Richard Kozlowski, stepped in and really made a difference. He gave me the confidence to succeed, and helped me make up the gap that I had developed in my education.

He was one of the three physics professors at the university, so I had classes with him nearly every semester. He used to tell us that his goal was not necessarily for us to learn the details of the material, but for us to learn the process of finding an answer.

We would try and do these long and complicated problems, and he would let you go down a path to solve the problem even though it was wrong. When you got to the very end, he would say, “OK, why did you go down this path? And what were the points on this path where you could have done things slightly differently?” So, he didn’t just tell us, “No, this is how you do it.” It was less about the content and more about the process.

CH: So you were greatly influenced by a mentor, and now you are a mentor. Can you talk a little about the value of mentorship, and how you are now passing it on?

JT: It’s amazing how much one person can affect another person’s life with really a very small amount of intervention. It’s not necessarily that other people don’t believe in you, but having someone actively telling you that you can succeed makes all the difference in the world. When you have a problem, and you feel like you can’t overcome it, having someone to help you, to guide you through it and let you know that everyone faces problems they think they can’t solve — that’s invaluable.

Xavier and I were just matched up. We met at the holiday party, and we’ve been texting, and we met up one time at the Learning Center. We’ve been bonding over sports, especially the NBA. When LeBron James was a rookie, I was in grad school in Cleveland, and my neighbor was a dancer for the Cavaliers. She used to get free tickets, so I got to see a lot of LeBron his entire first year, so I’ve been telling Xavier about that. Xavier is also into writing and is working on a science fiction fantasy story, almost like a novel. Just getting him to talk about these things and seeing him get excited has been a really neat start to our relationship.

CH: Are you and Xavier going to spend any time playing golf?

JT: I’m not a golfer, and everyone always gives me a hard time about it because I’m technically related to Lee Trevino. He once sent a letter to my dad asking if he could use our family names in a book he was writing about the family. He’s a distant relative. I have golfed before, and I think it’s a really cool sport, so maybe I will take it up. I do like the challenge of thinking about how to optimize your form.

CH: Tell us about your graduate education and career.

JT: After learning about all the exciting things you could do with a physics degree in college, I decided to pursue it as a career. I went on to get a master’s degree in electrical engineering at Case Western Reserve University in Cleveland, and then I went to work for a company outside of Ann Arbor, MI, that makes biomedical implant devices. We were working on what are known as Micro-ElectroMechanical Systems, or MEMS for short. One application was utilizing these micro-scale devices to wirelessly measure the pressure in the brains of people who suffered from hydrocephalus. They were tiny, about the size of Lincoln’s nose on a penny.

After that I went to a company in Cambridge, MA, called Analog Devices, where we were making MEMS accelerometers, tiny devices that go into many common electronics — smartphones, Nintendo Wii, you name it. Our devices were in the first iPhone. These are the devices that sense motion.

Our division grew fast, and when we moved to the company’s main campus just outside Boston, they said I needed a Ph.D to continue the type of research and development work I was doing. So, I went to Boston University to get my doctorate in materials science and engineering. That was when I started to get into nanophotonics, which is basically using nanostructures to manipulate light in ways you couldn’t normally.

After I finished my doctorate, I didn’t end up going back to Analog Devices. Instead, I went to work for CUNY here in New York City as the director of their nanofabrication facility. I was hired to design and build the facility, as well as develop it into a fully utilized research facility. We spent more than $30 million to develop it, and now it’s the most advanced facility of its type in the city. I ran that lab for five years, built a team, and did some of my own research in nanophotonics.

Then a colleague of mine launched a nanotech start-up called Chemeleon, and I went to work there as the principal scientist. The first product we’re working on is designed to detect the date rape drug. We’re putting nano-scale smart materials into glasses and straws that will change colors if they come into contact with the drugs.

JT: Yes, I recently started Nanotech NYC. Historically, nanotechnology hasn’t been a major industry in New York, but it’s been growing and growing over the past decade. Now New York City is right on the verge of competing with the traditional nanotech hubs like San Francisco and Boston, but there’s never been a real cohesive community of nanotechnologists here. The idea of the website is to be a platform so that you can find people, events, programs, resources — things like equipment and facilities that people don’t know are right next door that they can use for their research. I’m also trying to get the community together in the real world through a Meetup a colleague and I created. We’re hoping to connect both nanotechnologists and lay people who are just generally interested in nanotechnology.