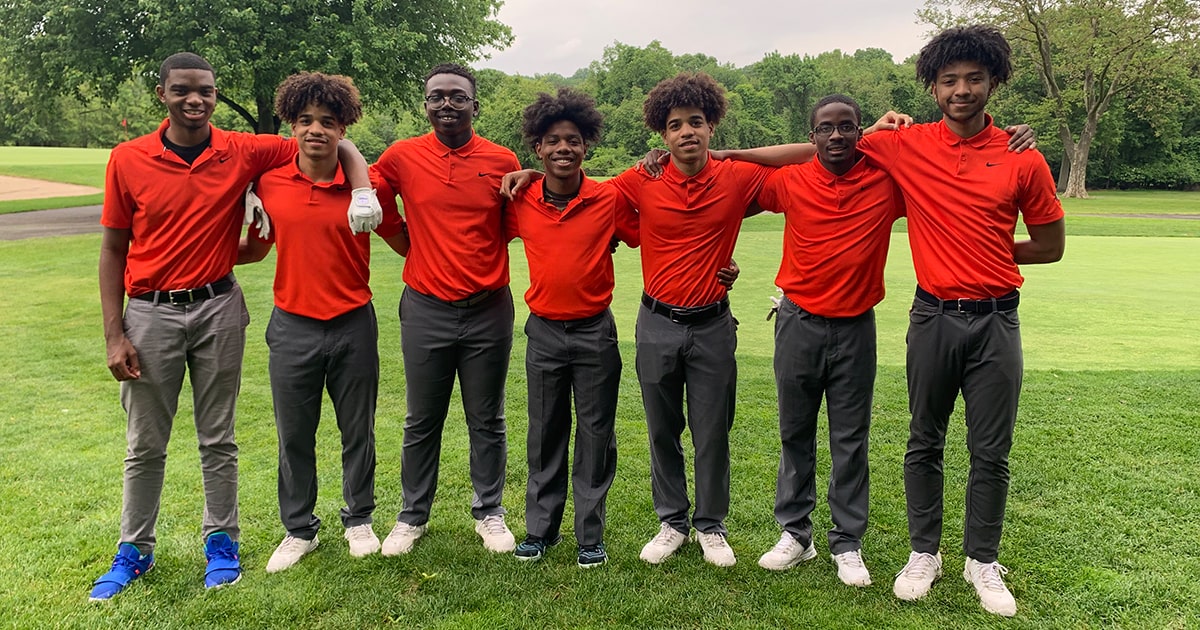 With their third-round playoff match about to start at La Tourette Golf Course in Staten Island on Tuesday, the young men on our high school golf team gathered around Coach Randy Taylor near the practice green.

“You’re here for a reason,” he said. “Don’t give up. Persevere. Play the best you can play. And have a lot of fun out there.” (Scroll down for the video.)

The reason they were there was a great season of Public School Athletic League golf in which they rebounded after losing their first two matches to reel off seven straight wins, a record good enough to earn them a first-round bye in the playoffs. After defeating Hunter College High in their first playoff match, they lost to McKee/Staten Island Tech on Tuesday, just missing a spot in the final four.

The team, known officially in the PSAL as the Percy Ellis Sutton Educational Campus, after the building where the Eagle Academy for Young Men of Harlem is housed, was made up of nine young men who have been a part of our Foundation’s after school program since its inception in 2015.

“As a team member and the captain, I am proud of everything we have been through as a team this season,” Smith said. “We had some heartbreaking losses but we came back and learned from them, and our team showed real commitment, even coming into the Learning Center to practice over the weekends and get ready for upcoming matches.”

All of our players will be back next year, and with another year of intensive golf instruction from our teaching professionals under their belt, they should continue to compete at a high level. Our middle schoolers are also improving every day, so the future looks bright for this high school program.

“I think that next season we can win the championship, I honestly do,” Juan Cortorreal said. “Our team is very motivated by this season and we are willing to put in whatever work we need to in order to win it all next season.”

To see the team at La Tourette this week was to see the fruition of years of work and tangible progress toward our Foundation’s mission, to improve life outcomes for young men of color through the game of golf. A high school golf team from Harlem composed exclusively of young men of color with a coach who looks like his players? That’s something the PSAL hasn’t seen before, but it’s a scene we expect to see repeated many times in the coming years.

“I want everyone to keep their ears and eyes open,” Taylor said. “Next season this team will make a statement. Eagle Harlem and the guys from the the Bridge will be the team to beat. I know this because I know these young men. The future of this game is bright, and it’s in Harlem.”