In June, we told you about Triniim Jones’s NOAA-CREST HIRES internship. This month, we asked him to send us an update in his own words. In August, he’ll send us another update. Here’s what he had to say about what he’s been up to so far: 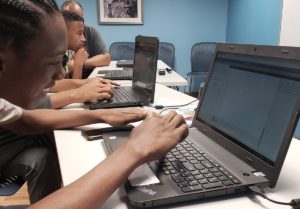 After taking Engineering Geology at City College, Triniim Jones will now apply what he learned to his work with a research team there.

At the orientation for the program, they explained that we would be taking a course at City College to get three college credits and then working on a project with an undergraduate mentor and a Ph.D. student. Then, at the end of the program, we will present our project and receive a $1,000 stipend.

The first thing we did in the program was listen to presentations from Ph.D. students. They had us hear the presentations so that we could get an idea of what group we would want to work in. After hearing all the presenters speak, we picked our groups, but before working on our selected project we had to complete the college course. The name of the course was Engineering Geology.

The course was compressed into 11 days and split into three parts taught by three different professors. For the first three days we learned GIS (geographic information system), which we used to make maps out of the data we were given. For the next four days we learned about remote sensing and how to create images using Python (a high-level programming language). During the last four days we learned how to analyze and display data by coding with Python. For these three sections, we had to do small projects to get the grades necessary to get credit for the course.

After finishing the course we were split up to work on the projects we had chosen. I chose to work with Professor Jimmy Booth’s Weather and Climate Research Group. Once my project is complete, I have to create a poster to present my research at a symposium on Aug. 9.