Erik Easton working on a swing change with Kyle Barthelmy, one of the high school seniors in our after school program.

CH: Tell us a little about the role that sports played in your house when you were growing up.

EE: We were a big sports family. My mom is in the hall of fame at Wagner College for basketball, and my dad played basketball and baseball there. Growing up, I was the youngest, and I was always competing with my two older brothers — 2 ½ and 5 years older than me — in different sports. My prelude to golf was playing just about every sport, including baseball, basketball, soccer and a lot of Ping-Pong, with my brothers and on teams.

CH: When did golf become your main athletic focus?

EE: My dad was always into golf, and I have pictures of me when I was a young, young kid with a golf club in my hand, but I was so into other sports that golf kind of went by the wayside until I was about 11 or 12. Up until then, baseball was my favorite sport, but when I went from Little League to the next league, I wasn’t as good as I had been in Little League, and from there I started making more trips to the golf course. Once I started playing a lot, I got hooked immediately and dropped all of the other sports pretty fast.

I loved the team aspect of the other sports, but you could play a baseball game and not really do anything all game. Sometimes it was boring. But I could play golf by myself, wherever, and I never got bored. In the backyard I would chip around a lot, and in my house I would putt and chip. My middle brother’s love for golf started about the same time, so we would just push off each other to get better.

We belonged to this public course across the Massachusetts border, Edgewood Golf Course in Southwick, where we played a lot of weekend tournaments, best balls and stuff like that with my dad and my brother. We’d tee off at sunrise and play in tournaments where you could win clubhouse money. 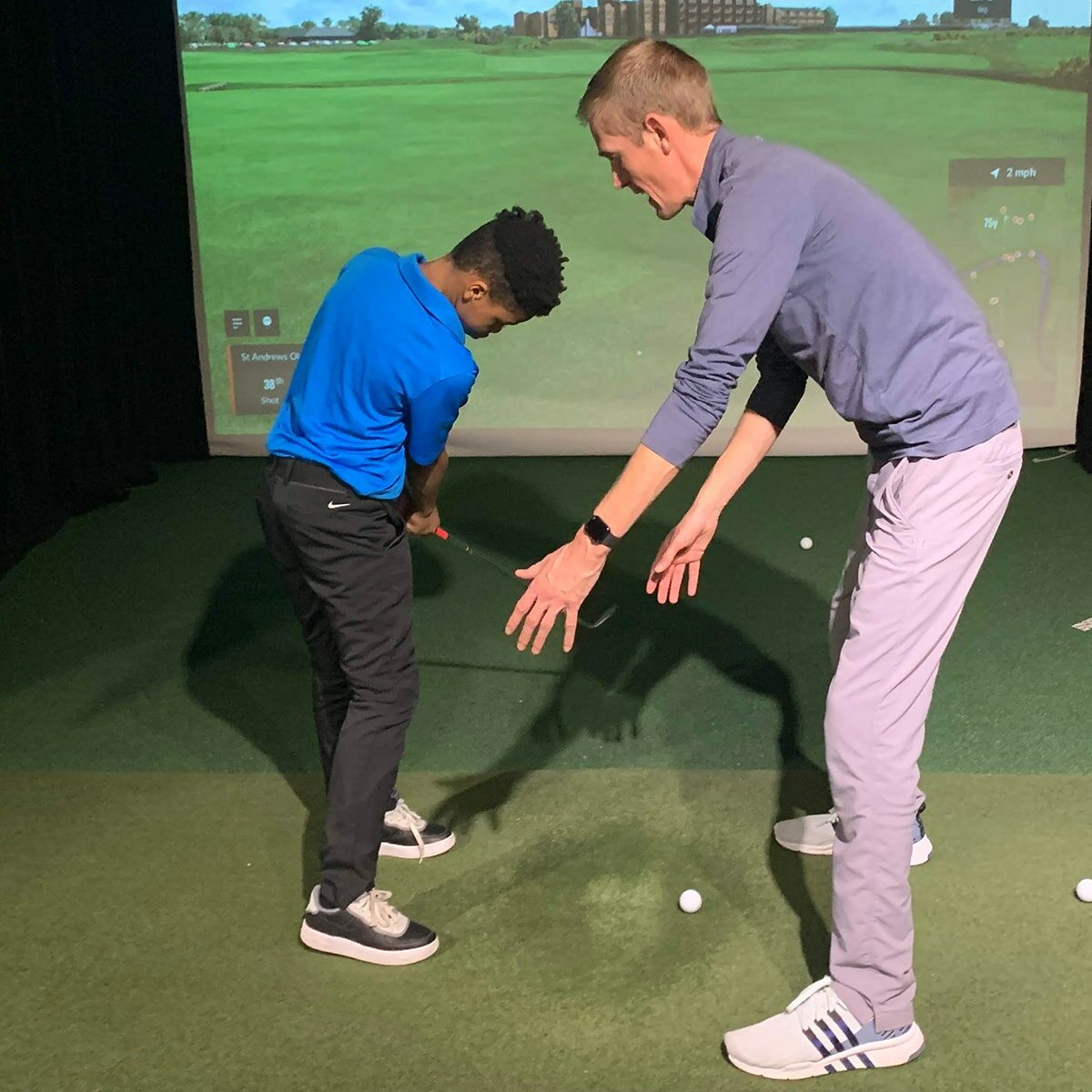 Erik Easton working with Darnell Wilkins during a recent after school session.

CH: What were your experiences playing team golf in high school and college?

EE: I made the high school golf team as a freshman, and we won our conference that year. My brother was really, really good in high school; he was the Connecticut junior golfer of the year one year. It was good for my game to try and catch up to him.

My first year in high school, I shot 92 in the state tournament, and it’s in my golf memory as a real scar, but it motivated me. My sophomore year I didn’t do great in the state tournament, but I finished in the top 5 my junior year and second my senior year. That got me into the New England Interscholastic Golf Championships in New Hampshire, where I three-putted the 18th to finish in a tie, and then came in second after my opponent birdied the first playoff hole. It was disappointing but showed me that I could compete at a pretty high level.

I got a full scholarship to play golf at Central Connecticut. I went there my freshman year, and we had a good team and won our conference. That got us into the NCAA Division I regionals in Seattle, and we didn’t finish well there, but it was a good experience to see how good some of those guys were. That’s when I decided I couldn’t be in Connecticut playing golf, so I went to Johnson & Wales University in North Miami, which had a really good golf team. I played with one or two guys there who made the PGA Tour.

CH: Did you always plan on a career in golf? How did you end up at The Bridge?

EE: I majored in marketing because I liked the creative side of business, but my focus was more or less golf. I was in Miami, I was working at a golf course and playing a ton of golf, so I was just seeing how good I could get.

For a couple of years after college, I mostly worked with dad, who is a contractor, and my brothers. We worked on houses, doing interior work. During that time I kept playing in state opens and other amateur tournaments in New England.

I realized that being a contractor was not my calling. I liked the work, but I also got into caddying one of those summers, and I realized I could make more doing something that I liked better, and I was excelling at it because I knew what I was doing on the golf course.

During that period, I was also going to Florida a lot. I caddied at a course in Opa-locka called Westview, where a lot of players from Johnson & Wales would get jobs and work on their games. One of my best friends in college, who also played on the golf team, was working at a course in Rhode Island, and I went to visit and played golf with him and Mike Sweeney. That was the first time I heard about The Bridge. And then I went out to the Hamptons to visit my brother, who works at Sebonack, and his roommate was a caddie at The Bridge. I caddied there a couple days that year, and then the next year I ended up working there full time.

I started at The Bridge as a caddie and then worked as assistant caddie master and also got familiar with a lot of the jobs inside and outside, eventually working my way up to being a teaching pro. Now that I look back at it, my years at The Bridge were more like a PGA internship. I hadn’t been considering PGA membership, but after a suggestion from the Director of Golf, Jeff Warne, I started working toward certification and will be a PGA member in January.

CH: How would you describe your approach to teaching the game?

EE: My approach started with the way I learned the game. When I was younger, I can remember my brother and I thinking, “We’ve got to be able to break 45.” We were just out there hitting golf shots, figuring out what worked and what didn’t work, with terrible technology and clubs that didn’t fit us. We had regular-length shafts as little kids and wooden woods. This definitely wasn’t ideal, but it has influenced my approach to teaching.

I have the knowledge and the eye to pick out the things that are important in someone’s swing, but there’s still a lot of self-learning that people have to do, and I try to get them to the point where they understand enough about their swing to also get better and make adjustments when they’re practicing alone. A lot of it comes down to fundamentals, trying to help people maximize the efficiency in their golf swings.

CH: What’s your approach to working with junior golfers?

EE: It’s pretty much the same. If a junior has a lot of good things going for them, I don’t want to block those things, so I just try to fine tune their fundamentals and help them get a better understanding of what they’re doing. They’re not going to have a pro with them on the course during a tournament, so they need to know what’s going on when things go bad. And of course you have to keep them in it, keep them having fun, because if they’re not having fun, they’re definitely not going to want to improve.

CH: How has your experience at The Bridge Golf Foundation been so far?

EE: I absolutely love it. I like the environment, with half of the young men working on their studies and half playing golf, and it’s working — they are getting better. I’ve known the juniors and seniors since they were freshman in the beginning of the program, coming out to The Bridge, and I’ve seen how they’ve grown and blossomed as golfers and young men. I think a big part of their maturation has been the program, the hours that we spend with them, and what Bob [Rubin] and Stéphane [Samuel] and all the tutors do for them. I’m amazed by the whole thing and really like being part of it.

I’m also really excited about moving into the new space next month. I think the extra space and separate areas for the tutoring are going to make a huge difference.

CH: Have any golf instructors had a major influence on you?

EE: I don’t have a favorite teacher, so I try to expose myself to a wide mix. I like to hear what PGA Tour pros have to say, and what old-school golfers say because their stuff is still right even though the game is always changing. Also, the new guys like Sean Foley who really integrate technology like TrackMan into their work, and guys like George Gankas, who has helped Matt Wolf hone his really unique move. There are lots of different teaching styles out there, and lots of different playing styles, so it’s good to get familiar with as many of them as you can.

CH: You come from the border of New York and New England sports fandom. What are your allegiances?

EE: Well, I did play for the Red Sox in Little League, and I’ve always been a Red Sox and Patriots fan. Connecticut also had the Whalers, and I followed them too, but it’s mostly been Boston teams — Sox, Pats, Bruins.

CH: You’re living in Brooklyn now, your first time in New York City. What do you do when you’re not working at the Learning Center?

EE: Being in the city has been a real plus for me. It’s exciting, and I love exploring the city on my days off. I’ve also been going back and forth on writing ideas with my brother, who went to film school. He’s written some screenplays and is always working on something new.